She was nervous, she told me later, entering into this room of strangers. Committing to three days of living in the same house, sharing meals, and, more frightening, sharing the details of her wounds that had been locked away for decades . Yet, she came anyway.

We had come together to explore these very wounds. To mine the gifts of marketing language from the wounds. To learn from them how to uniquely position each woman in her marketplace so that she becomes magnetic to her right clients. And then to honor the wounds, to heal the wounded parts in each woman, to let go of self-hatred and shame.

For Cammie Jones, the wound was that she was weak and worthless.

Her deepest fear was that she would be cast aside, becoming one of the forgotten members of society.

Cammie is the premier professional organizer on the central coast. Her work revolves around helping people sort through all of the things they have, keeping only that which serves them. She often guides her clients to let go of decades of accumulated items. For many, especially the elderly, their things represent themselves. Letting go must be done carefully. Cammie lends a strong and kind voice to the process.

But for herself, her voice with less kind.

So, we decided to let her experience her deepest fear. To let her walk in worthlessness dressed as a homeless woman.

As she went through the bags of clothing we had brought, she laughed nervously, putting on layer after layer, topping it all off with an old knit cap.

But the day of the photo shoot was more serious. She wandered up the road. Picked up a Starbucks cup that Lindsay had just dropped and sipped the leftover coffee, as if that was her only option

And then she sat next to a pile of broken bottles and old tin cans.

When we reviewed the photos, Cammie teared up again. “I didn’t know how much that lived in me,” she said. “I feel the fear my clients feel when asked to give up their possessions. Their fear of being left with nothing but the clothes on their backs.”

Cammie began to look at her life without the fear driving her.

When Cammie got home, she examined what was working and what she was doing simply because others thought it would be a good idea.

She began to choose her joy, her curiosity, her vitality.

And so, when we gathered together again in Maui, she was excited. But she didn’t like the essence we had chosen for her to inhabit.

“I just want to wear my pretty top and have fun,” she told us.

We agreed that she could do whatever she wanted. And, I added, “I encourage you to push your edges a little. Stop worrying about what others will think. Stop being safe, aim for really, really out-of-this-world fun.”

She texted me the next morning

“I want to be a modern Janis Joplin,” she said.

That was cool. That was pushing the edges. That was really fun.

We found her a modern, cool hippie outfit, complete with beads.

She stood on the edge of the ocean and began to dance. 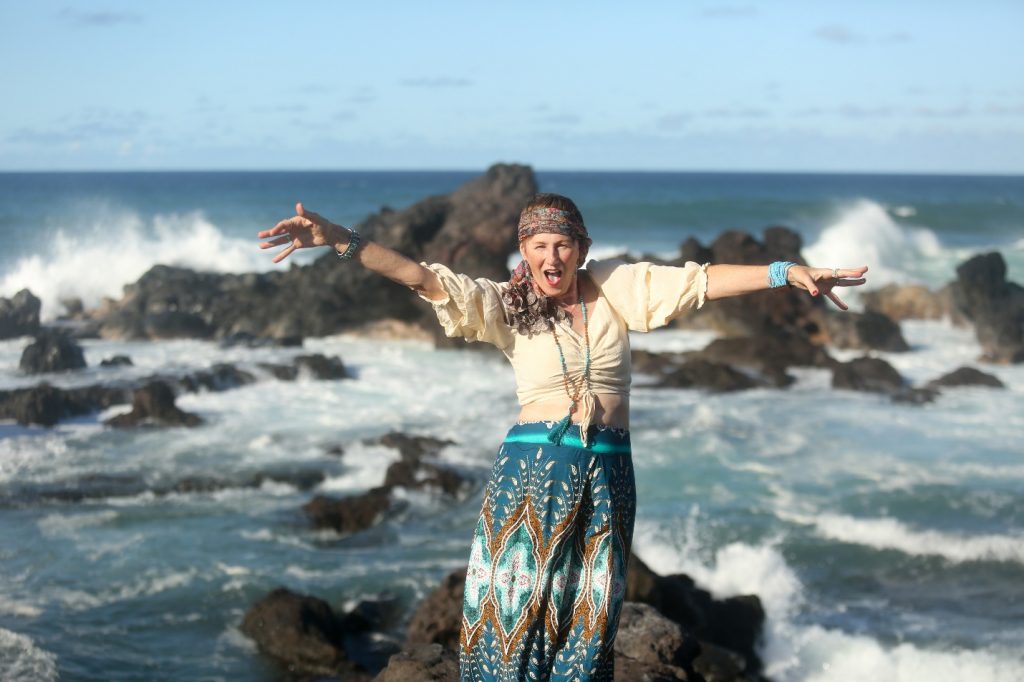 And we were inspired to sing, the only song I could think of in the moment, Jeremiah was a Bullfrog!

Cammie laughed at us and danced more.

We felt her joy burst forth radiating across the waters.

Tourist’s eyes were drawn to her, to her audaciousness, her vibrancy.

Still she danced, healing the hearts of those around her with her joy.

Get regular information and offers on marketing, business, and doing business in a way that honors the divine feminine, starting with The Art of Feminine Marketing Guide.